Founder Of Millennium Reserves Talks About Its Dependability And Mission


Millennium Reserves is an American-only company offering cash for land to residents in need of a quick closing time. 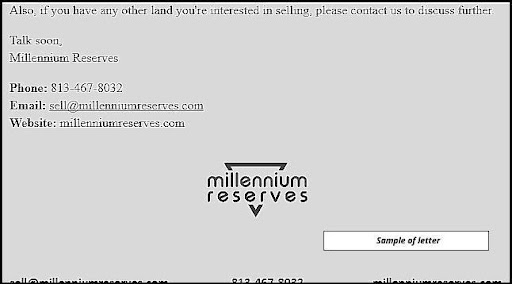 Numerous people are getting a letter in the mail from a company called Millennium Reserves offering cash for land in states such as Oklahoma, Michigan or just about anywhere in Middle America.

They say many are skeptical of their offer, but a glance at the company’s portfolio, leadership, and completed contracts reveal that nothing seems to be wrong with what they are doing.

“Quick cash for property” businesses have been around for some time now. Many people feel they take advantage of those in need because they don’t offer top dollar.

According to its founder, Millennium Reserves claims to be the quickest buyer, not the highest paying one.

“What we do is no secret. I’ll be the first to tell you that we try to get land for a price that makes sense for us to endure the headaches, closing costs, waiting time and hopefully make a profit in the future. The benefit to the seller is they get cash in less than a month, and oftentimes, around 2 weeks. We aren’t doing anything revolutionary, that’s what Elon Musk is for.” – Carlos Salinas, Founder of Millennium Reserves

“This means land owners won’t be getting maximum value for their land. That’s a tradeoff only they can judge if it’s worth it for them,” Carlos added, saying that some people like the speed and simplicity of a hassle-free transaction only companies like Millennium Reserves can offer.

According to the company, the most popular alternative method of selling property is through realty companies. Sellers would have to pay high commission fees and closing costs, which are deducted from the final sale price.

Landowners that don’t mind waiting several months, and sometimes years before a buyer appears may feel like this is worthwhile.

Weighing out the pros and cons of going at it alone, through a realtor or through “quick cash” companies like Millennium Reserves is important, Salinas noted. “There’s positives and negatives to all methods.”

More information about Millennium Reserves is available on the company’s official website.