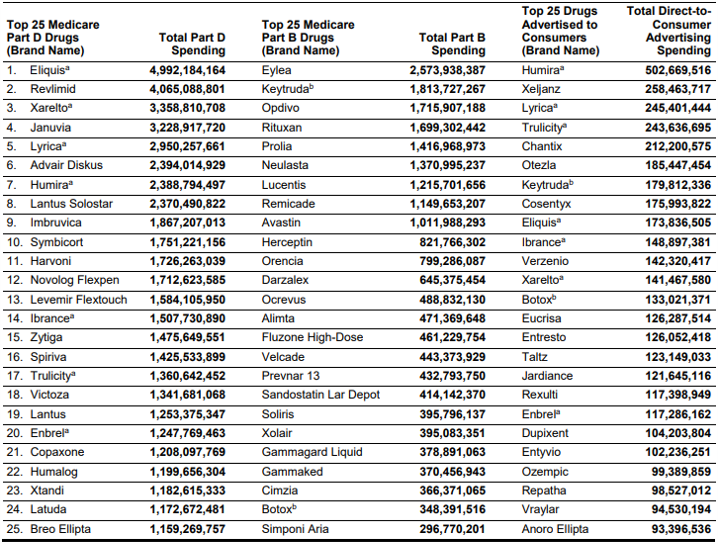 The beneficiaries of medical insurance are mainly elderly people, many of whom suffer from various health conditions. Pharmaceutical manufacturers want these patients and their doctors to understand the new medical treatments available (ie, new approvals) and the new uses of existing drugs (ie, new FDA indications). Direct-to-consumer advertising (DTCA) is a way for pharmaceutical companies to inform consumers about these new treatments. In recent years, the expenditure of pharmaceutical companies on DTCA has increased significantly, from US$1 billion in 1997 to US$6 billion in 2016.

From 2016 to 2018, drug manufacturers spent $17.8 billion on direct-to-consumer advertising (DTCA) for 553 drugs… Nearly half of the expenditures were used to treat chronic diseases such as arthritis, diabetes, and depression Three types of therapeutic drugs. GAO also found that almost all DTCA expenditures are spent on brand-name drugs, of which about two-thirds are concentrated on 39 drugs…

… Drug TV advertising accounts for about 76% of DTCA’s total expenditure ($13.4 billion out of $17.8 billion)… followed by magazine advertising ($3.6 billion), digital advertising ($603 million) and other types of media Advertising, such as newspapers and movie theaters ($113 million).

DTCA expenditure data comes from Nielsen Media, and the information for each drug (for example, approval year, indications, brand and generic drugs, biological and small molecules) comes from FDA approval.

Humira had the highest DTCA spending between 2016 and 2018, at US$1.4 billion. Spending on the neuropathic pain drug Lyrica was US$913 million, and spending on the type 2 diabetes biologic drug Trulicity was US$655 million.

The report also found that Medicare and its beneficiaries spent $324 billion on advertising prescription drugs (58% of Medicare drug expenditures) and $236 billion (42%) on drugs without any DTCA expenditures. ).

A key question is whether increased advertising will lead to increased use of these drugs? The answer is almost certainly yes (if pharmaceutical companies don’t work, why do they want to advertise?), but this is not the only one, and may not even be the main factor.

In addition to DTCA spending, the stakeholders we interviewed also cited many other factors that may affect drug use and drug spending, including medical insurance. These factors include doctor’s prescription decisions, health plan prescription control, the therapeutic benefits of the medicine, and the manufacturer’s expenditure on medicine promotion for doctors. Some stakeholders stated that, in their view, DTCA spending may make a small contribution to overall drug use and spending compared to other factors. For example, some stakeholders explained that although DTCA may encourage and help consumers and healthcare providers to have an informed dialogue about their medical conditions and treatment options, it is the provider that ultimately determines the medical condition and treatment benefits of the drug Judgment.The medicine is prescribed to the patient

In addition, some reverse causality needs to be considered. DTCA spending may not be randomly distributed among drugs. Blockbuster breakthroughs like Humira (for immune diseases) and Keytruda (for treating various cancers) are largely more likely to receive high DTCA expenditures because they represent a huge clinical improvement over the previous standard of care. Drugs that provide only marginal clinical benefit may have a much lower DTCA.

Below are the top drugs in Part B, Part D, and DTCA spending.