YatriPay is a Secure Cryptocurrency Service Tailored for Travellers

Hong Kong – YatriPay is a revolutionary new blockchain-based cryptocurrency and digital payment solution. The service is designed to help alleviate the multi-billion-dollar Travel and Tourism sector with innovative in-house solutions.

YatriPay is looking to disrupt important sectors by deviating from the centralized banking model entirely. Instead of this model, the company is offering a bold new completely digital payment solution powered by its native digital coin called YatriPay Coin (YTP).

This is a completely new technology and methodology for the way you book and experience your travel adventures. YatriPay will utilize a blockchain method that allows for the user to experience travel in a totally unique way. After deciding their destination, the user can go to the YatriPay mobile app to purchase YTP Coins and book the entire trip with YTP. YatriPay has laid the groundwork with partners in select countries (for now) to allow the user to completely and seamlessly fund their entire travel via the YTP Coin. And if there are any Coins remaining, they can be used to “stake” to earn even more YTP for future use. The founders will soon distribute the first batch of coins through various exchanges or directly on the Yatri Pay Portal and mobile apps. Pricing and exchange rates will be determined by the community after release.

Yatri Pay will not only be a “one stop shop” for travel, but completely Decentralized. Yatri Pay uses a proprietary Proof of Stake (POS) algorithm that completely eliminates issues with short range and coinage attacks. The unique blockchain utilizes Proof of Stake concensus in order to further help decentralize coins, secure the network, and participate in getting Rewards. Rewards are in the form of additional, free YTP coins just for holding in YatriPay’s proprietary electronic wallets. Rewards will be based on the amount of holdings, length of holding, difficulty, etc. The platform and official coin launch with be 1, December, 2022 with a clear vision. The mission: Revolutionize the travel industry through state of the art blockchain technology using the highest security and easiest method yet to visualize where you want to go, fund the entire adventure and have the lowest overall costs for the trip.

The YTP is an important cornerstone of the entire project as it envisages a digital currency that is created and distributed among users in a fully automated mechanism like Bitcoin.

But, unlike Bitcoin which is a slow, often strained blockchain ecosystem with limited functionality, Yatripay has the following major advantages:

The Yatri blockchain network has a fast blockchain creation time of just 30 seconds. This gives it a significant advantage over networks like Bitcoin and Ethereum which take several minutes to do so.

This allows YTP coins to be transferred from one user to another at an amazing speed, literally seconds after a transfer request is made. This allows it to serve the function of a widely used digital currency, especially at the point of sales.

While Bitcoin and others do have the lightning network that speeds up transactions as well, it is relatively much more insecure than its counterparts. So, the best solution is to have faster transaction times but these legacy blockchain systems cannot change it because it will destroy their ecosystem.

Unlike Bitcoin, YatriPay uses a Proof of Stake (PoS) mining algorithm. This is a clear departure from the Proof of Work (PoW) algorithm that BTC uses. While PoW is somewhat more secure, the PoS is the future.

All newer blockchain networks have either migrated to a PoS mining system or are in the process of doing so. Ethereum, the second largest digital currency is close to making this paradigm shift. But it took a long time like 2 years for it to be able to do so.

With YatriPay, you get instant PoS compatibility and all the benefits that come with it. It is also much more environmentally sustainable because it is not energy intensive at all, unlike a PoW system.

Users can also lock their coins in place to earn passive rewards aka staking returns. While the staking returns are constant, users’s earnings are dynamic as it depends on the number of coins locked in place.

So, early bird users of the YatriPay platform can earn decent rewards within the ecosystem.

The YatriPay plans to utilize metaverse in order to turn its ecosystem more interactive. This capability is currently being developed further keeping in mind the dynamics of the fledgling sector.

Fully immersive technologies like VR and AR are leading the development of the metaverse concept. All the big companies are involved in it and development is at record levels. YatriPay wants to discover the much less talked about virtual tourism and hospitality sector. That is likely to make an impact in the market in a good way. 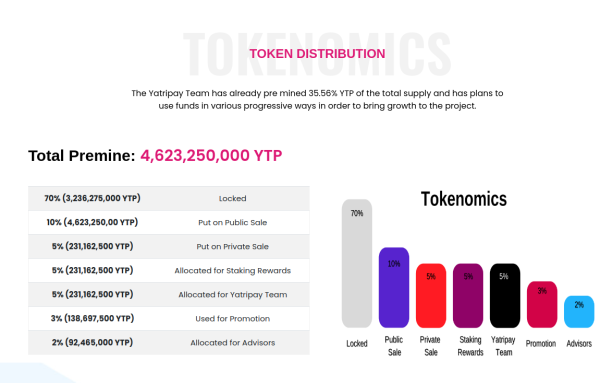 A massive 70% of the premined YTP will be locked in place to be used later on. While 5% of premine will be periodically sold to investors.

Around 5% of the premine is being dedicated to staking rewards. Users can lock their YTP tokens in place and earn periodic rewards.